“Dogs have a way of finding the people who need them.”  – Thom Jones

I grew up near a lake with mountains, woods and fields all nearby ready to explore.  It was a great place to be a kid.  But the best part about where I lived was that my best friend Lainey lived right up the dirt road that ran past my house.   We were inseparable.  We rode the bus to school together, went to the same church, went to Girl Scouts together, were cheerleaders on the same squads….we did everything together.

One of our favorite things to do after school was to go for walks.   Weather permitting, we walked almost every day, talking about the things that young girls talk about like school, family, friends….boys.   Usually we’d head up the dirt road, passing by the summer cottages that people from the city owned but only used during the summer months.  We’d head up to the lake, walk along the shore, head over to the long path through the woods that everyone in the area called Lover’s Lane and wind our way back home on the roads between the cottages, sometimes taking a shortcut through the stand of woods behind all of the cottages.   We knew where the good stuff was, like which cottage had the best apple tree; which one had the outdoor water pump that you pumped by hand to get a cool drink; where the abandoned playground was, the swings and merry-go-round still in usable condition. 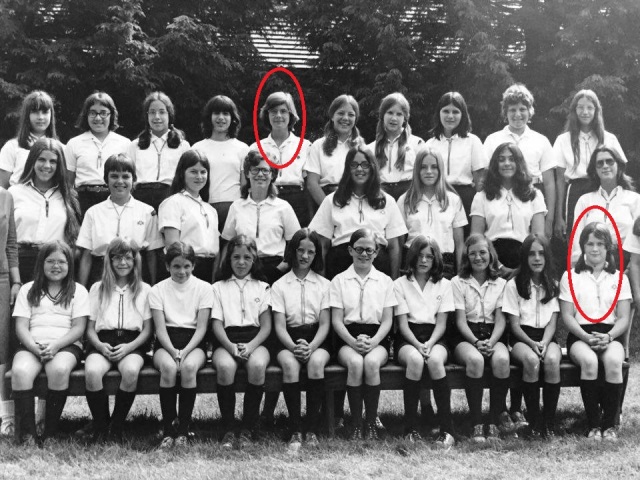 It was on one of our walks when we were about 13 years old that we found a tiny little gray puppy.   He was some kind of a terrier mix and reminded us both of Toto from the Wizard of Oz. He was not wearing a collar or any identification and we had no idea where he belonged.  But since Lainey’s dog had passed away our first thought was that she could keep this puppy since she didn’t have one anymore.  So the first place we went with him was to her house and she asked her mother if she could keep him.  Her mother said, “No you can’t keep him.  Go see if you can find who he belongs to and if you can’t find who he belongs to, find someone else to keep him.”

We were devastated, but not out of options; we went to my house.   But because we already had two dogs, I didn’t have a lot of hope and I told Lainey so on our way there.   When we arrived, I asked my Mother and she said no, just like Lainey’s mother did.  And then she added, “If you cannot find his family, find someone who will keep him.”  It was like they went to same parenting school!

So off we went to see if we could find the family who lost this little puppy.  But it was the off-season at the lake and the summer cottages were empty.  Since there were only a handful of full-time residents at the lake we didn’t have many families to ask.  Along the way Lainey and I talked and decided that given our mothers reactions, the odds of anyone wanting this puppy were slim.  So maybe, just maybe…one of us could keep him after all if we couldn’t find the family who had lost him.

After asking one or two families if the puppy was theirs and being told no, we went to Mr. and Mrs. Dewey’s and knocked on their door.   Mr. and Mrs. Dewey were an older couple who only recently built their year-round home near the lake. One of the best things about their piece of property was the very large pond behind their house.   Before the Dewey’s bought the property many of the neighborhood kids, myself included, fished the pond in the summer and ice skated on it in the winter. But now that the Dewey’s bought the property, the pond was theirs and we didn’t know if they’d continue to let us fish or skate there anymore and none of us kids were brave enough to ask.   In fact, Lainey and I didn’t know them at all.  We only knocked on their door so that we could truthfully tell our mothers that we asked every single family if the puppy was theirs before we asked each of them again if we could keep him.

Mrs. Dewey answered the door and said no, he wasn’t their puppy.   But she thought he was adorable and called her husband over to look at him.  Then she said, “If you can’t find out who he belongs to, bring him back here, we’d love to have him.”  We told her that we only had one or two more families to ask and if he did not belong to them, we would be back.

After asking the remaining families if the little puppy was theirs and being told no, we headed back to Mr. and Mrs. Dewey’s home.  They were both thrilled to have him and promised us that we could come and visit the puppy any time.   After staying there for a bit playing with the puppy and getting to know the Dewey’s, Lainey and I each went home.

The next day we both went back to the Dewey’s to see the puppy.   By then he had a name, Whiskey.  Mrs. Dewey said she named him that because he spent his first night in their home sleeping in a cardboard whiskey crate.   Whiskey seemed happy, the Dewey’s seemed happy.

Through the process, Lainey and I got to know Mr. and Mrs. Dewey and it turned out they were great people and even better neighbors.  They not only let us visit Whiskey whenever we wanted, they let the neighborhood kids continue to use the pond.  We would fish in the summer, and in the winter time when it was time to ice skate, Mr. Dewey would plow the snow off of the pond with his tractor.  He even installed lights that shined on the pond so we could see to skate at night and built us a fire pit at the edge of the pond where we built fires to keep warm.  Mrs. Dewey would bring us out hot chocolate and Whiskey would run around on the ice, darting in and out of our quick-moving legs.

Whiskey turned out to be a great little dog who had a long happy life with Mr. and Mrs. Dewey.  I don’t know how old he lived to be, but he was still going strong when Lainey and I left for college…together, as roommates.   Even though we no longer live near each other, Lainey and I are still friends, more than 50 years after we first met in 1965, and we often chat about how it would do the both of us a world of good to go on a nice long walk together.