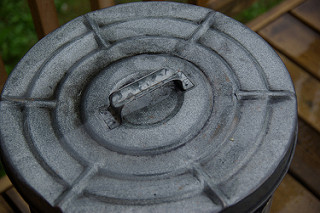 I was about three years old and sound asleep on a summer night when my father woke me up and said, “Lorrie, come on.  I want to show you something.”   I climbed out of bed and followed him out to the back porch.   He sat down on the porch steps, sat me on his lap and whispered in my ear, “Be quiet and watch over there.”  He pointed  to the corner of the garage.  I sat there quietly staring at the corner of the garage where the metal trash cans were kept, just outside of the range of the light that shone from the corner of our house.

Soon two little black and gray animals came and jumped up on top of the cans.  I had no idea what they were.  “Do you see them?” my father whispered.   I nodded yes while he continued, “They’re raccoons.  Watch what they do.”

I watched as they worked together and pried the lid off of one of the trash cans which clanged to the ground.  Then they both disappeared into the can.   They went up and down in the can, tossing things onto the ground.  Soon, another raccoon showed up and joined in the fun and all three of them were chattering to each other while tossing garbage on the grass and driveway.    Before long, the trash can fell over, the three raccoons still inside, and they – and all of our kitchen garbage – ended up on the ground.  I giggled and watched as they went through our scraps and fought over bits of food all the while chattering to each other.

After a few minutes, they climbed onto the second trash can and as they began to pry the lid off, a voice behind us said, “Bill!  Are you just sitting there watching those raccoons dump the garbage all over the place?”   I peeked around the side of my dad to see my mother peering at us through the screen door.  She hadn’t seen me sitting there on my dad’s lap.

“Shhh…” my father said, “I’m showing Lorrie the raccoons.”  But it was too late, the raccoons had heard my mother and scampered off into the darkness.   My dad laughed and said, “Did you see that?  Did you see how much fun they had playing in the garbage?”

My dad died unexpectedly when I was 19 years old.  But memories don’t die, they live on in those of us left behind and show up unbidden and unexpected – like the memory of my father showing me the wildlife in our own backyard.

8 thoughts on “Trash cans in the night”