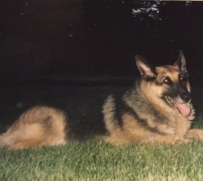 A short while later I heard my husband, who was in bed next to me, say, “That darn dog.” At that point I was in that twilight sleep phase, not really awake; not really asleep, but at his comment I vaguely noticed I could still hear Kelly barking.  A second later I almost jumped out of skin when Steve yelled, “Kelly, no!  Knock it off!”   Because the windows were open, she heard him and she quickly quieted while I gave my husband the stink eye for yelling so loudly, rolled away from him and fell back asleep.

My husband though is a morning person and frankly, it drives me nuts.  He usually wakes up as soon as the alarm goes off, gets out of bed and makes himself some coffee. But that’s not what drives me nuts.  What drives me nuts is that he is happy and talkative in the morning.   He actually uses words to form sentences and ask me questions – questions that he knows I will not answer because I cannot form a cohesive thought.  Steve thinks it’s just hysterical that I’m like that so some mornings, he’s just awful with his happy thoughts and keeps rambling on just to get a rise out of me.  Because of that, most mornings I ignore him until I am actually awake, which is to say about 30 minutes after I have gotten out of bed.

So that summer morning, despite taking Kelly outside and despite my husband yelling, I easily fell back asleep.   Steve however, did not.  A short while after giving him the stink eye and falling back asleep, I heard him say, “That damn dog, if she doesn’t shut up, I’m gonna kill her!” as he got out of bed and headed downstairs.

I tossed back the covers, jumped out bed and ran downstairs yelling, “Steve! Steve! There’s something wrong!”

Running through the downstairs on my way to the backdoor, I found my husband standing in the dining room loading a gun.  Remembering what I last heard him say I yelled, “What are you doing?  Kelly is barking because there is something wrong!”

He looked at me and continued loading the gun and when I heard the bullet click in place I yelled, “You can’t shoot my dog!” and I ran over to the backdoor and stood in front of it, with my arms and legs spread across the closed door, blocking his path. With that, Steve started laughing – full on, maniacal laughing like Jack Nicholson in the Shining, and as I stood there, spread-eagle in front of the backdoor watching him, time stood still.

Jack Nicholson in The Shining

It was like when I used to fall off of my bike when I was a kid. The fall itself would seem to happen in slow motion while a hundred thoughts flew through my head about how I was falling, how it was going to hurt or how I might be able to break the fall. I would have so many thoughts while falling at what seemed to be a very, very slow pace but that in reality only took two seconds.

With time standing still, my mind was racing as Steve walked from the dining room, towards the backdoor with the loaded gun.   As I watched him coming my way all I could think of was that we would be on the evening news because he had gone mad.   I imagined that night’s top story would be that he killed all of us and our neighbors would be featured in the segment saying things like, “I just can’t believe it. This kind of thing never happens in our neighborhood,” or “He seemed so normal,” or “He was a nice guy, kept to himself, kept his grass cut, you know, a good guy”.

All I received in response was more maniacal laughter.   After taking a step or two more, he stopped coming towards me and, as he tried to stop laughing he said, “Groundhog.”  I stood there staring at him, certain now that he had in fact, gone mad.  Finally, he collected his breath and chuckling he said, “Get out of the way, there’s a sick groundhog at the kennel.”

I looked over my shoulder out the window of the backdoor and saw a groundhog, its front fur soaking wet, with its face right up against the wire of Kelly’s kennel.   The groundhog was having trouble standing; it was wobbly and in poor shape and reminded me of the rabid raccoon we had in the driveway several weeks earlier.  Kelly was still in a barking frenzy as I stepped out of the doorway.

I said to Steve, “Are you sure you can shoot that without hurting Kelly?”

Steve went outside into the yard and stood parallel to the ill groundhog and took aim. Kelly ran into her dog house as Steve shot, instantly killing the groundhog.   After checking the groundhog to make sure it was dead, he turned and walked back into the house.  As he put the gun away I said, “Aren’t you going to get rid of it?”

“I’m going to have my coffee first. I’ll get rid of it later.  Did you really think I’d shoot Kelly?”

I didn’t know how to respond so I said, “I thought you lost your mind,” and he laughed. But not a crazy Jack Nicholson laugh, just his regular Steve laugh.

4 thoughts on “He seemed so normal…”