I was doing the dishes late one summer afternoon when I spied a furry face looking at me through the window over the kitchen sink. Startled, I pointed at the window and shouted, “It’s a…a…”  Dang it!  My mind couldn’t think of the right word.  I knew what I was looking at, but I couldn’t say the correct word so instead I started over and blurted out, “It’s a coonrac!”

When my daughter was 18 months old, a friend of ours won her two prizes at the Ohio State Fair; a large stuffed orange teddy bear and a large stuffed raccoon.  Being a toddler, she couldn’t say the word raccoon and instead called it a coonrac.   For years, coonrac was one of her favorite toys; she slept with it; she laid on it when she watched t.v. and she had tea parties with it.  Eventually, she passed it on to her younger brother who also called it coonrac and played with it regularly, and as the kids grew they used that word, coonrac, to mean actual raccoons and before too long, all four of us began using it like it was a real word that actually meant raccoon. 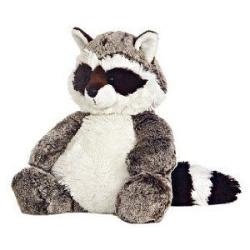 But by the time the critter appeared in the kitchen window, the kids were pre-teens and no longer used the word coonrac.  It was one of those baby words that we had all used when they were little, a baby word that had grown up and moved on.  Until of course, I was staring at one through the window and suddenly, it was back.  Coonrac.   As soon as I said the words, Steve and the kids came over to the window to see the raccoon standing on top of a large, decorative wooden barrel that was just under the window.   The window looked out on the back porch and the barrel, which sat between two chairs, was used as a table.

As we stood there, staring at the masked intruder, he began humping the Christmas tree stand that was on top of the wooden barrel.   (Don’t judge.  It was covered in sap and we put it there to dry off and yes, six months later it was still there, but don’t judge.)  As we stood there watching the raccoon going to town on our Christmas tree stand, both kids started giggling like crazy.  Pre-teens tend to do that when there is something sexual going on.  “Well, I guess it’s true.  They do like shiny things,” Steve said.

Over the giggles, I decided to try to scare the raccoon away.  I knocked on the window and yelled at him.   But this was no normal raccoon.  This was Coonrac.   He yelled back.  He stopped humping the Christmas tree stand, stood up on his hind legs, put his front paws on the window pane, opened his mouth and barked at me.  He was one very angry-looking raccoon.  After yelling at me, he went back to humping the tree stand.  “I think he’s sick,” Steve said, meaning that he thought the raccoon was probably rabid.

Steve grabbed the shotgun and headed out the front door and walked around to the back porch.  He yelled at the raccoon to get him to run off, and he did, but not before barking at Steve and making it known that he was not happy about it.  The raccoon ran around the side of the house and disappeared.

Steve then told us to come outside and see what the raccoon had done.   He had dug holes all along the one side of our house, evidently looking for a way to get underneath it. In doing so, he spread bark mulch and plants all over the sidewalk. He had also chewed up our welcome mat.  Continuing around the house, we saw that he had removed a rock from the rock foundation that supported the old summer kitchen portion of the house and we were fairy certain that he had crawled under there to hide as we had other animals do that in the past.

The next afternoon I looked through the screen door and saw the raccoon clawing at and chewing on the welcome mat.  I yelled to Steve that Coonrac was back and while I kept an eye on the raccoon, Steve went out the front door and put the stone back into the stone foundation under the summer kitchen so that the raccoon could not run back under there and hide.  After Steve came back into the house, I tried again to chase the raccoon away by yelling at him, but again he barked back at me and went right back to ripping up our welcome mat.

At that point, Steve got the shotgun and went out the front door and walked around the house to the back porch.  He tried to chase the raccoon away, but the raccoon didn’t want to leave and began barking at Steve and looking like he was going to attack.  Steve stomped his foot very loudly on the concrete patio and the raccoon ran around the house as he had done the day before.  Steve and I followed him around the corner, but this time, since his escape under the house was blocked, he climbed up the pine tree next to the house and from there,  began barring his teeth and growling and barking at us.   He was an angry, dangerous raccoon who was not afraid of humans and was very, very aggressive.   Unfortunately, this was not our first go-around with a suspected rabid raccoon, and based upon our previous experience, we knew we had to put it down ourselves and dispose of the body, which Steve did.  Killing an animal – any animal – is hard, even when you know it is something that you have to do to protect your family and end the animal’s suffering.

Afterwards, as I was picking up the now de-flowered Christmas tree stand to put it away, my daughter said, “I think you need a new welcome mat.”

I looked over at it.   It was a pretty mat with a photo of a little house in the counrty on it that said “Home Sweet Home”.  And it was a frayed mess; two corners were completely gone, it had a hole in the middle and strings were hanging off of the sides of it. I laughed and said, “No way, its perfect now.”