A few years after we bought the house we currently live in we dug flower beds.  And so it was that I found myself one hot July evening planting 104 day lilies that my friend Bob had given me. He bred the day lilies himself and although I thought them all beautiful, they did not meet his standards.  So I was the fortunate recipient of his lovely “mistakes”.  It was hot dirty work in ground that was not the best; full of rocks and clay.  But I was determined to get all of the flowers Bob had given me planted over the course of the next two days.

One of the Day Lilies my friend Bob bred.

As dusk approached, I was digging and planting furiously when I heard “Hello”.   I looked around but did not see anyone so I went back to digging another hole.  A few minutes later I heard it again, “Hello.  Hello.  Pretty boy.”

I stood up and looked around and saw my neighbors standing in the woods that run on the one side of our property looking up at a tree.   “Hello.  Pretty boy”, my neighbor said to the tree.

I walked over to where they stood and looked up.  There, way up in the tree sitting on a branch was a parrot.  He was looking down at the three of us, “Hello, hello, pretty boy.”

“Where did he come from?” I asked.

“I don’t know,” my neighbor said, “We first saw him in the trees at our place and we followed him over here.  I’m trying to get him to fly down to me; I want to keep him.”

“We’re not keeping him,” her husband said.

I couldn’t believe she thought she could just keep it.  It belonged to someone.  And at this point it wasn’t even on her property, it was on mine.   Rather than say all that to her, I said, “Someone paid a lot of money for him and he is someone’s pet.  I’m sure whoever he belongs to is worried sick about him.”

Because I’ve had birds as pets, I knew what I was looking at, an African Gray Parrot.  I also knew the odds were good that he would not fly down from his perch more than 30 feet above us because he did not know us, because it was almost dark and because well, sometimes parrots don’t do that, sometimes they don’t even fly back down to their owner once they get outside.  That is why in some parts of the country, like Florida, they have parrots living in the wild.  But this is Pennsylvania – a parrot could not survive in the wild here. 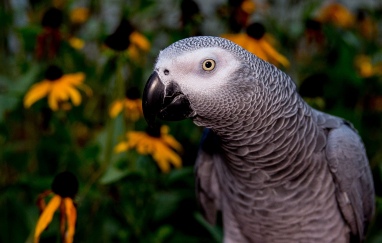 “He can’t have come far.  He probably belongs to someone nearby.  We need to find his owner,” I said.

As we stood there wondering where he came from, the darkness continued to creep in and the parrot got quiet.  Although my neighbor wanted to wait there, convinced the parrot would come down, I finally got her to understand that because birds cannot see well in the dark he wouldn’t fly now unless it was a matter of survival, which clearly, it wasn’t – at least not yet.  I told her that he would probably spend the night right there on the branch and that tomorrow morning, we could look for his owner.

“We’re not keeping him!” her husband answered.  I went in for the night.

The next morning the parrot was still in the tree; right where we last saw him and my neighbor called the local Humane Society for help.  Fortunately, they arrived in a van that was clearly marked as the Humane Society.  As the two men they sent stood there looking up at the tree trying to figure out how to get the parrot down, a man who lived just down the road pulled up to see what was going on.  Turns out he was missing a parrot.  When the parrot saw his owner on the ground, he flew down and landed on his shoulder.  I don’t know who was happier, the owner or the parrot or the Humane Society guys.  I do know who wasn’t the happiest….my neighbor.  Oh, she was happy the bird was safe, but she made sure to tell the owner how she had hoped to keep the parrot.

The owner, to his immense credit, was so happy to have the parrot back that he offered her a pair of love birds he had raised for her help in saving his parrot; a parrot he had for twenty years.  Of course, she wanted the pair of love birds, but her husband said no.  He thanked the man for his kind offer, but said they did not need to be rewarded for doing the right thing.

Since the parrot incident, there have been other times when my neighbor has made it known that if she caught whatever the stray animal of the day was, that she would keep it.  She tries to catch some animals only because she wants to keep them, not because she wants to help them find their way home or get them the help they may need.  I just don’t understand people who think that way but if my dogs ever go missing, I know the first place I’m going to search.