My son Aaron has always loved apple cider so I was not surprised when he purchased a 125 year-old cider press several years ago.   The cider press, still in its original condition, is both beautiful and practical. Although Aaron bought it to make himself hard cider, which is similar to an apple wine, my daughter-in-law, Renee, saw the potential for a new family tradition, and so the Annual Deck Family Apple Festival was born.

The Apple Festival revolves around the making of cider, but there is plenty of food, games and contests.  Aaron and Renee provide lunch but everyone who attends is asked to bring an apple dessert for the “Best Apple Dish” competition.  There are games for the kids, including a candy filled pinata, and games for the adults…everything from relay races to apple trivia.  Most importantly, everyone who attends is invited to help make cider and anyone who wants to take cider home with them is asked to bring apples.

The cider process begins with washing the apples, first in a bath of water with a bit of chlorine, then in a plain water bath.  After washing, any bad spots are cut out of the apples and they are placed into a chopper that grinds them into smaller pieces.

Once ground, the apples are ready for the cider press.   Using a wooden form, the chopped apples are laid onto a piece of cloth that is then closed around the apples.  A board is set on top of that layer of apples and the process is repeated until there are several stacks of apples bound in cloth and topped with pressing boards. 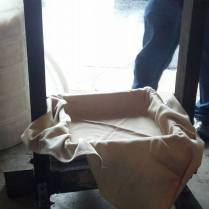 Starting a stack of chopped apples.

Apples covered; ready for the next layer!

Once the stacks are made the press is used to squeeze the cider from the apples.   There is a round wheel at the top of the press, that when turned, moves like a screw lowering the press onto the stacked apples.  As the wheel turns the apples get squashed and their juice, the cider we are after, drips to the bottom of the press and exits out of a piece of copper tubing, ready for jugs.

My grandson takes the first taste. 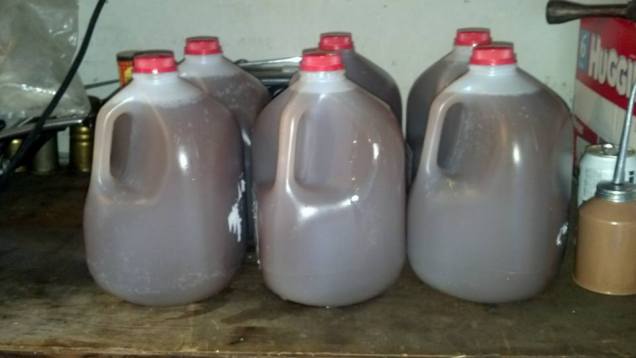 Some of the finished product!

This year it rained for the Annual Apple Festival, but it didn’t slow down the activities, pinatas were broken, apples were bobbed for, 35 gallons of cider was pressed and mass quantities of food was consumed.

My grandson; so proud of his successful apple bob!

This year – for the first time ever – I won the coveted 2016 Grand Champion Apple Dish trophy for my caramel apple pie.  Oh yes, there are trophies, as well as gift baskets and blue ribbons that are awarded to the winners of all the games and contests.  But the competition for the best apple dish trophy is fierce, so for my entry this year, I used a pie recipe that won the Indiana State Fair -and you can find it here if you’d like to make it yourself.

The pie baking in my oven.

The goodies I won. 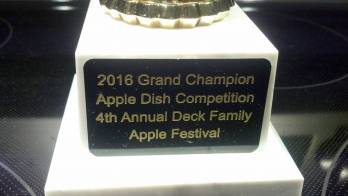 The Annual Deck Family Apple Festival is fun every year, rain or shine, trophy wins or not. I’m so proud of my son and his lovely wife for creating a new family tradition that centers around an old-fashioned process.  It’s a tradition that their children already treasure and one that I hope they carry on.