My husband Steve and I have had at least one Saint Bernard at any given time for the past 16 years.  To accommodate them, we have a kennel, that is actually a 12 foot by 20 foot building that is insulated and fully equipped with water and electricity.  Surrounding the dog kennel is a large fenced in area that allows our dogs to run and play all day without direct supervision. This has worked out well for us and for the Saints.  Saint Bernards, which were originally bred in the Swiss Alps, love being outside and they love the cold and snow .  Although their kennel is insulated, and although we have wall heaters for it….we’ve never had to turn on the heat; the dogs have a very natural ability to keep themselves warm.

But having a nice cozy building with an always open door to the outside has its own issues to contend with – specifically, mice.  When the temperatures drop, the mice move into the dog kennel and try to make a nest in the dog beds and eat the dog food.

But mice attract cats – specifically feral cats.  Over the years the cats were always smart enough to stay away from our dogs, until one cat decided that an insulated building with free meals sounded like a good idea and he decided to sub-let the place.  He would show up to spend the night after I had taken our Saint in for the evening and when I’d take her out the next day before leaving for work, he would leave.  It worked out great for all of us.  The cat was content and there were no mice in the dog kennel.  And then one day….he stopped showing up.  Such is the life of a feral cat.

By the time the feral cat disappeared, spring had arrived and mice were no longer an issue, but I knew that I needed to get myself a kennel cat before winter.  At the time, Hobo the Wonder Kitty was still living in our house, and there was no thought about moving him outside at that point.

Of course as summer does, it flew by and before I knew it, it was September and I still needed a kennel cat. After searching the classified ads online, I called a man who said the kittens he had advertised were gone but that he had just found some kittens that had been born under his porch and I was welcome to take one of those – if he could catch them.  I told him to call me if he was able to capture them and that I would come and look at them.

Sure enough the next day he called to say he had caught all of the kittens and their mother so I drove over to his house, which was only a few miles away. He was an older man who lived in a run-down trailer in the middle of the woods and he had cats everywhere; perhaps as many as 50 cats.  Attached to the trailer was a dilapidated porch where he had the newly found kittens in a very large metal parrot cage.  There were four other cats confined on the porch, a mother cat and her three young kittens. There was hardly any litter in the litter box, not much food in the food dishes and the place was filthy.  So was the man.

The kittens were very tiny and he said he thought they were only a few weeks old.  Their mother was a yellow tiger stripe and there were four kittens, one yellow, one gray and two orange.  He told me that I was welcome to pick one out and he’d keep it for me, but that I couldn’t take it home yet as it was still, “sucking on its mama’s tits”.  I assured him I did not want the kitten until it was able to eat kitten food and that he should call me when it was time to bring it home.  I looked at all of the kittens.  They had fleas.  They had kitten poop stuck in their fur.  Frankly, I wasn’t even sure they would live long enough to be weaned.

After selecting a little orange female, he asked me if I’d consider taking two kittens.  I told him no, that I only needed one.   He told me how he was over-run with cats and pointing to the black momma cat lounging on the porch he said, “That one there’s pregnant again. Those other black ones running around here are hers, she just had them four months ago.”

After talking to him for a bit it became clear that he was in over his heard.  He couldn’t afford to feed all of the cats on his property, let alone pay to have them spayed or neutered.  I told him about a nearby cat clinic that performs low-cost spaying and he said he was aware of it but that he couldn’t even afford their low cost of twenty-five dollars per spay or neuter.  I truly felt bad for him.  Before I left, he asked me again if I would consider taking two of the kittens and again I told him no.

He called me five days later and said all the kittens were eating kitten food and I could pick up my kitten whenever I wanted.  Since it was a Thursday, and since I didn’t trust that such little kittens could actually be eating real food by then, I told him I’d come over on Saturday.  Meanwhile, I researched how to remove fleas from kittens and how to get them to eat and I went shopping.  I bought a litter box, litter, kitten chow and cat milk.  Yes, you can buy cat milk.  Which isn’t really milk from a cat, but milk that has been treated so that kittens can eat it without upsetting their stomachs.  I bought it to add to the kitten food to make it soft enough for them to eat.

Saturday morning, I went to pick up my new kitten, who I decided would be called Lucy because of her fur  color.  When I arrived, he asked me again if I’d consider taking two of kittens. Again I told him no.  Yet somehow I came home with two flea-ridden, tick covered, poop encrusted orange kittens.  But I knew this…they’d have it better as my kennel cats than they had it as dilapidated porch kittens. 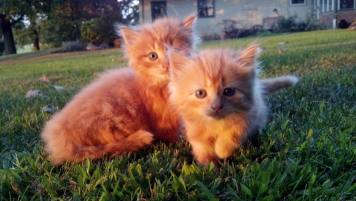 When I got them home, I bathed each in Dawn dish detergent to kill the fleas, pulled out the ticks and put them in a large dog crate in the kennel.  The crate was large enough to hold their litter box, food, water and toys.  The smallest of the two, who I named Ginger, also because of her coloring, was so weak that when she opened her mouth to meow, no sound came out.  I was worried she wasn’t going to make it.  The other one, Lucy, was bigger than her sister and much more vocal.  So vocal that she wouldn’t stop hissing and spitting at me.

The first few days, they drank their cat milk and sucked on the softened kitten food.  After a week they were eating fine and playing.  They looked good, were gaining weight and seemed healthy.

The following week, I took them to the cat clinic.  They assured me that the kittens were healthy, but that they were only six weeks old.  Which meant that when I brought them home, they were only four weeks old.  While I was at the clinic, I told them about the man I got the kittens from and how he needed help neutering and spaying his cats.  When they said that they would capture his cats and treat them for free I gave them his telephone number.

Ginger, on the left, looking sweet.  Lucy on the right, showing her cattitude.  October, 2014.

Lucy and Ginger were copycats; they looked so much alike that at times, even I could not tell them apart.  And Ginger, the one I almost did not bring home, the second kitten I did not want….Ginger was a love.  Ginger loved to be held and petted and she would purr relentlessly. Lucy, on the other hand, was a spitfire from day one.  She did not like to be touched and always ran away from all human contact.

They grew into healthy, beautiful cats and the following spring, once they were both spayed and had all of their shots, we put a cat door in the dog kennel.  Once the cat door was installed, they were out and exploring their world.  They’d leave every morning and return every evening, often dragging a mouse they had killed in the corn field home with them, but there were no more live mice to be found in the dog kennel.

Six months ago, Ginger did not come home from one of her daily jaunts.   We have no idea what happened to her but we assume she was killed, probably by another animal.  Lucy, strong feral spirit that she is, goes on.  She still does not like people and she still does not like to be touched, but she will follow us around the yard, always maintaining at least a six-foot distance.  We’ve thought about getting a kitten to keep her company, but fear that she would injure it or kill it.  Lucy is not a friendly cat, not to us, not to our dogs and certainly not to other cats, many of which she has chased off of our property.  So for now, she is alone and although I feel saddened that she does not accept the comfort that we can offer, I take solace in the fact that she has a pretty good life as a kennel cat.

18 thoughts on “Lucy and Ginger”