I saw the goat first.  It was walking along the woods at the edge of the field heading towards the road.  When I pointed it out to my husband Steve, he went into the garage and came back with some dog food in an old metal coffee can.  Standing in the driveway, he began shaking the can.  The goat turned and headed in our direction.

“What did you do that for?  Why would you encourage that goat to come into the yard,” I asked.

“That’s a good-looking goat; somebody’s got to be missing him.”

“A good-looking goat?  Are you nuts?  It’s a goat; a goat is a goat and I don’t want it up here eating all of my flowers,” I said as the goat got closer.

“I’m telling you, look at that goat.  I don’t know what kind of goat it is, but it’s expensive. Someone’s going to be looking for him.  Look at him, he’s clean and he looks like he’s been shaved, like he’s ready for a fair or something.  He looks like a show goat.”

The goat checked out the contents of the coffee can and decided that since he was a goat, he wasn’t going to eat dog food and he moved on to the flower bed.  As he stood there, eating petunias and hostas, the two dogs we had at the time, both Saint Bernards, were barking and running along their fence.  But their excited barking and running had no effect on the goat; he calmly kept munching away and after about a half an hour, the dogs were just as calm as the goat and they lied down in the grass and stared at him through the fence – great watch dogs that they were.

Steve and I decided that the best thing to do would be to contain the goat in the fenced in area of our yard where our dogs were until the owner of the goat showed up.  Although this sounded like a good idea on its surface, I had never caught a goat before and I told Steve that I thought we needed help, “I think we should call Joe and Greg and ask them to help us.  They’ve had goats before, they know how to handle them.”

Joe and Greg live across the road from us on their own little farm.  They’re great neighbors and always willing to help out in times of trouble.  The fact that they had goats of their own in the past made them my go-to people in this situation, but Steve saw things otherwise.

Despite my misgivings, I locked our dogs in their kennels so that we could catch the goat and then set it free in the dog’s fenced in area while we waited for its owner. Steve walked up behind the goat and herded it towards me like he planned, except that when the goat got to where I was standing, he reared up on his hind legs and put his head down,  and came at me with his horns – his two, large curved horns – aimed right at my chest.  Having about two seconds to react, which was enough time for me to realize that he was going to knock me on my ass, I side-stepped it to the left and the goat, still on his two hind legs, jumped by me on my right.

“What did you do that for?  Just stand there and when he comes grab his horns!”

Steve was angry.  “You’re not going to get hurt!  Let’s try it again but this time, grab his horns.”

So we tried it again but …I did not grab his horns because I don’t care who you are, when a pissed off goat is coming at you full steam with his horns aimed at your chest, you step out of the way.

“We need to call Joe and Greg,” I said again.

But Steve, being a man, didn’t want to ask for help.  He wanted to try to catch the goat again.

“Okay, but this time, I’m herding the goat, you catch it by the horns,” I said.

So I herded the goat towards Steve who stood there, ready to grab the goat by the horns. Things were looking good until the goat reared back on his hind legs and ducked his head and came at Steve with his horns aimed right at Steve’s middle.  Steve took a step to the left and the goat went past him on his right.

Joe and Greg arrived a few minutes after I called and the four of us stood in the driveway, looking at the goat in the backyard. 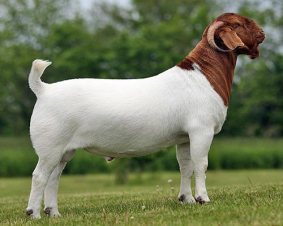 “That’s what I told her, ” Steve said, and he went on to explain how he used the dog food in the can to get the goat to come into our yard so that it did not end up on the road.

“Well, if we can catch it, we can put it in our field.  Hopefully, whoever is missing it will see it there and take it home.  We need something to put around its neck so we can walk it home,” Joe said.

I grabbed a dog leash and we all walked out towards the goat.  We made a circle around the goat and herded it towards Joe.  As the goat got near Joe, it reared up its hind legs and put its head down, aiming for Joe’s middle.  But a second before impact, Joe grabbed the goat by its horns and using the horns as handles, pushed the goat off to the left, away from his body. Then the goat put his front legs down on the ground and as he stood there, Greg looped the dog leash around his neck.  The good-looking goat was caught!

After admiring the goat for a few minutes, Joe and Greg walked the goat down our driveway and across the road to their place.  As they arrived, a man came driving by in his truck.  He was missing a goat.  He had taken the goat to some kind of event and said that when he returned home, he found that the goat had somehow opened the door to the trailer he was in and jumped out and that he had been searching everywhere for it.  He was worried sick he said, because the goat was a prize-winning Boer Goat that was worth a lot of money.

I don’t know much about goats, but I have no doubt how that goat opened the trailer.  I’m sure he reared back on his hind legs, put his head down and aimed for the middle of the door with his horns…because sometimes the only way out is to put your head down and push your way through.

18 thoughts on “The Good-Looking Goat”