When it comes to Christmas decorations I know what I like; classic evergreen wreaths with big red bows, live Christmas trees, preferably a fraser fir or a blue spruce, green garlands with pretty white lights, pointseittas, and old-fashioned, hand-made knit stockings on the mantel.  I’m a Christmas decoration snob and I’ve been that way for a long time.

I’m so bad that I used to put my kids hand-made ornaments on the back of the Christmas tree so they didn’t ruin the look I was going for.  If the kids said anything, I’d tell them that I was so proud of them I put them in the back so that the neighbors could see them through the window the tree was invariably set before.

I hate seeing Christmas commercials on television in October and get dismayed at the over-all commercialization of the holiday which seems to start earlier and earlier every year.  And since such commercialization now starts so early in the season many people decorate their homes and yards before Thanksgiving, which has always been a big no-no in my book. To top it all off, for years I have not liked the types of decorations many people put in their yards because to me, they are tacky.  Things like blow up snow globes, dancing penguins and Santa and his elves riding on a see-saw seem ridiculous to me.

And yet…this is currently in my front yard: 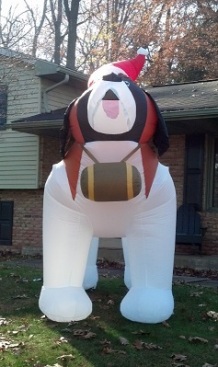 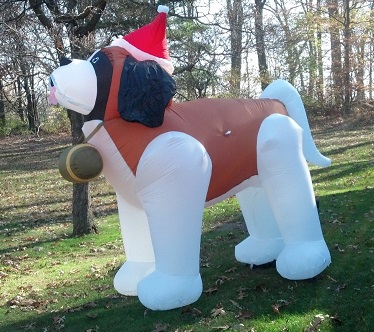 Yes, that is a giant blow up Saint Bernard, complete with a brandy keg, wearing a Santa hat. It’s 9.5 feet long, about 10 feet tall and when a slight wind blows, its tail wags and I love it!

Because my husband Steve and I have lived with Saint Bernards since 2000, I fell in love with this the moment I saw it online last year, but I couldn’t buy one because they were sold out everywhere.  My daughter-in-law remembered me complaining about how I couldn’t find one so she bought one for me and had it sent to me in October as an early Christmas present – commercialization makes such things possible.  I was so thrilled, I couldn’t wait to put it up and throwing all of my old decorating rules out of the window, I told Steve that I wanted it up before Thanksgiving so that the grandchildren could see it when they came for dinner. So we put it up last Saturday and after it was up, we left home to go to an event two hours away.

On our way home that evening, we ran into bad weather.  It began with sleet, followed by gale force winds and finally, we were driving in snow that was blowing sideways across the highway.  When we finally arrived home, the Saint Bernard was gone.

Steve said that maybe someone we know stole it as a joke.  I said, “No, if it’s stolen, it’s because they’re so hard to find, and I’m calling the cops!”

After parking in the garage, I kicked off my dress shoes and put on my Crocs and ran outside. Steve was right behind me and walking around in the dark, with the snow blowing sideways, we found the blow up Saint Bernard in the woods alongside our house.  He was laying there, caught in the blackberry canes.  The two of us worked to free him from the blackberry canes and I got scratches from pulling the canes out of the Saint Bernard and our clothes.  Finally, freed, I grabbed as much of it as I could and Steve grabbed the rest and followed me back towards the house.  As we were walking, the snow filled my Crocs, my socks got wet and I was freezing.

But I didn’t slow down; I kept going because I was too wet and cold to slow down.  So he yelled at me again and said that he couldn’t go that fast because of his bad knee and all I could think was, “Man, it just doesn’t get any tackier than this; two decrepit people dragging a large deflated plastic Saint Bernard through the snow and wind.” 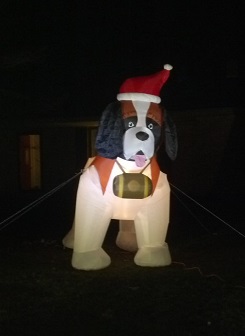 24 thoughts on “Christmas Blow Up”