Our female Saint Bernard, Neva, was a runner.  For the first two years of her life, I could only take her outside on a leash because whenever the opportunity to go for a run through the neighborhood arose, Neva took off.  I chased her through fields, through the woods, even through a neighbor’s open garage; she went in through the overhead door and out the open man-door that lead to their (thankfully) fenced in back yard.

Eventually, to keep her safe and to make our life easier, we installed a six-foot high fence around the outdoor kennel.  The fenced-in area probably covered at least a quarter of an acre and allowed her plenty of room to run.  Every morning before work, I’d walk her out there on a leash and let her go.  Every evening when I got home from work, I’d walk her back to the house on a leash.  The fence saved our sanity because we didn’t need to worry about her getting hit by a car, and saved my legs because I didn’t have to run so much.

Neva, despite her size, was surprisingly quick.  One winter night after work when I went out to bring her in, she scooted past me before I could get the leash on her collar and ran off.  I ran after her, yelling at her to come, but it was useless.  She had that glazed over look in her eyes which meant she wasn’t listening; she was going on a run.  She returned less than fifteen minutes later with a dog toy, a black squeaky football that she found while on her jaunt.  We still don’t know where she stole it from, but she loved that football and for the rest of her life she carried it everywhere with her.  She carried it outside every morning and carried it back in every evening.  She had plenty of other toys, including a different football, but none of those mattered.  The black stolen football was her pride and joy.  She’d walk around with it in her mouth, making it squeak while whining.  She loved that stupid football – it was so hard to toss it out when she died several years later. 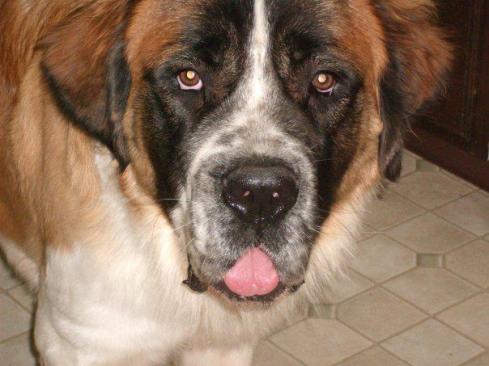 A few weeks after the football incident, Neva was hiding in the corner of the fenced-in portion of the yard when I went out to get her.  She had her back to me and would not come.  When I finally got a good look at her, I saw that she had something in her mouth. Because that part of the yard is dark in the middle of winter, I went back into the house to get a flashlight.  I didn’t know what she had, but I knew I wasn’t going near it unless I could see it.

When I returned with the flashlight, Neva turned from me and ran.  I followed her, but she kept moving around the fenced-in yard evading me until I finally cornered her next to the house. She was intent on keeping her treasure and only dropped it on the ground after I told her numerous times to “Drop it.”

It was an opossum.  That goofy dog had been running around the yard with an opossum in her mouth playing with it like it was her favorite football.  When the opossum hit the grass, it landed on its back.  Although I couldn’t see any blood or anything wrong with the critter, it turned its head to the side, sighed, quivered and lay there like a martyr, with its mouth hanging open and its tongue hanging out.  Because I didn’t want to get any closer to it, I called Neva to me, put the leash on her and walked her into the garage.

I had heard that opossums play dead when they feel threatened; a quirky maneuver often referred to as “playing possum”.  So although I considered getting a shovel to pick up the opossum, I quickly realized that was not a good idea. Because if it wasn’t dead and I picked it up with a shovel to toss it over the fence into the woods…if it wasn’t dead and ran up the shovel handle towards me…I’d pass out. I’m not particularly fond of opossums.

Although I’m not fond of opossums, my husband Steve, hates them.  It is the one animal he cannot tolerate which stems from a boyhood incident where he ran into one that was hanging upside down from a barn rafter. Having an opossum cling to his face terrified him, which is totally understandable – it would terrify me too.  So although I hated to ask him to go get rid of the opossum, when he got home from work, I did exactly that.

“It’s probably gone already.  It probably pretended to be dead and left after you came in,” he said.

“I know they can pretend to be dead.  But you should have seen it, it sighed, like a last gasp. It stopped breathing.  If it’s not dead, it deserves an Emmy. We have to go out and make sure it’s not there.  If it is there and its dead, we have to get rid of the body.  Or else Neva will carry it around and play with it like she does her football.”

Once he reluctantly agreed that we had to go and see if we could find the opossum, I grabbed a flashlight and he grabbed the shovel.  When we got out there, the critter was gone and we both were relieved… but probably not as relieved as the opossum, who had literally escaped the jaws of death unharmed.