Before I brought home our first Saint Bernard puppy I did a lot of research about Saint Bernards and giant breed dogs in general.  Because I’ve always lived with dogs, I wasn’t interested in learning more about general dog care, but rather, the types of things I needed to consider before bringing home a puppy that would eventually be the size of a full-grown man.

That was back in 2000, back in the early days of the internet when all we had was AOL and dial-up service and it took forever to get the information you were looking for.  But I was committed and spent days reading websites and chatting online with Saint Bernard owners in the old AOL chat rooms.  Their advice was sound.  Make sure you have a large enough vehicle to transport a full-grown Saint.  We did.  Make sure you have enough money to pay for the vet bills and medications as giant breed medications cost more than medications for smaller breeds.  We did.  Make sure you know how to train and start training early.  Check and check.  I found lots of helpful information and felt fully prepared when I brought home our first Saint Bernard, Sampson, who at sixteen weeks of age weighed 60 pounds.

Sampson, who at his prime was a strong, muscular 180 pounds, eventually became old, arthritic and thin.  For a Saint Bernard, that is an accomplishment as many do not live more than seven years.  But Sammy lived to be eleven years old.  In Saint Bernard years, that’s ancient.  We knew his time was coming when he had a lot of difficulty walking.  My husband Steve and I discussed whether or not we should call the vet and make arrangements to have him put down.  We decided against it; we decided that he would let us know when the time was.

And so he did.  One Friday evening when I arrived home from work, Sammy could not get up.  I don’t know why these things always seem to happen on a Friday evening or on a holiday, but if your dog is going to be in a bad way, guaranteed it’s going to go down when the vet is not available or the office is about to close.  But my vet, who treated Sammy his whole life, agreed to remain in the office until we arrived and to put him down later that evening.

Once that was resolved, my husband Steve and I quickly realized that we needed help to load Sammy into the truck.  I called our neighbors, who knew Sammy well, to come and help.  It took the four of us to get Sammy positioned on a blanket and lift him into the bed of the truck, and then, once Steve and I arrived at the vet, it took us and two vet techs to carry him into the office.

Living – and dying – with giant breed dogs means that you not only need to have a vehicle large enough to transport them to the vet, but that you may also find yourself needing the assistance of friends or family to physically lift and move a disabled, injured or dying dog. I recommend that before bringing home a giant breed that you consider how you will manage a medical emergency.

Three years later, in the early morning hours of February 5, 2014, we had an ice storm. The ice covered everything, including several inches of snow that was already on the ground.  On February 7th the ice still covered the ground as the temperature had remained below zero all week. That morning, I took Neva outside as I usually did before I left for work.  Although I had to use my boots like ice skates to make my way to her kennel and fenced in portion of the yard, Neva, being a Saint Bernard, had no problems navigating her way there.  We have a large fenced in area in our yard that surrounds a large kennel built inside of an insulated 12 x 20 foot shed.  Living with Saint Bernards also means that you need to have enough room for them that includes outdoor space where they can run and play as well as a cozy shelter.

That evening I arrived home from work late to find that Neva was not waiting for me by the fence like she always did.  I knew that was not a good sign.  I found Steve in the garage, still talking on his cell phone about work issues; he had just returned home as well.

I put on my boots and coat and slid my way to the kennel to check on Neva.  I found her lying in the outside portion of her kennel, on the ice, with her head on her front paws.  She looked like she was sleeping, but she was not.  She was dead.  I felt her and she was still warm, so she had not been dead long.

I slid/skated my way back to the garage and told Steve that he needed to hang up because I needed his help.  I never tell him that so he got of off the phone immediately.  I then told him that Neva was dead and that she was lying on the ice.  Because it was below freezing outside and because our entire yard was covered in ice we had to act fast.

“We need to get her out of kennel now, while she is still warm before she freezes fast to the ice,” I said.  (I mean, can you imagine?  She would have been frozen fast to her kennel floor until a thaw!  The whole thought gave me – and still gives me – the heebie-jeebies!)

Steve and I, both in our 50’s and terrified of breaking bones, skated in our boots across the ice covered yard to the kennel.  We quickly realized that carrying a 150 pound dog across the ice to the barn – a good fifty yards away – was not going to work.

So off I slid to the house to find a large blanket that we could use as a litter to move her body while Steve slid off to get the tractor.  Steve was back at the gate with the tractor before I returned with a blanket.  And when I got there, I realized the blanket was not needed to move Neva because she was already next to the gate.

When I saw that, so may thoughts began flashing through my brain.  Steve had sent me off for a blanket to keep me busy because he knew that I would not agree to dragging Neva over the ice.  That he had dragged her across the ice made me angry.  That he had planned to do so all along and had sent me into the house on a wild goose chase because he knew I wouldn’t agree to it made me angry. Finally, I was angry with myself because I realized that he was right; if we had tried to carry her even that short distance, because of the ice, someone was likely to get hurt.

Steve had the bucket of the tractor on the ground, so I put the blanket in the bucket and we slid Neva onto the blanket.  I covered her with the blanket and Steve parked the tractor in the barn.  The next evening, after work, we loaded Neva’s body into the bed of the truck and drove her to the vet’s office for cremation.  It took four of us to lift her out of the truck and into the little brick building where she would stay until the cremation service arrived to pick up her body the next day.  (I will also note here, that like most things for giant breed dogs, even cremation costs more.  The bigger the dog, the more it costs to not only feed them and care for them, but to dispose of their bodies as well.)

I remember well the day that Neva died and the day the ice storm hit because a few days after she passed away, I called her breeder to see if she was expecting any puppies in the near future.  To my surprise, one of her females had just had a litter, born on February 5th, the day of the ice storm.  After hearing about Neva, she allowed us to be the first to see the new puppies and to have the pick of the litter.  We met our boy Arlo for the first time a few weeks later, on February 18th. 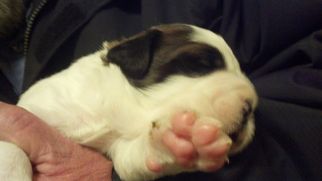 Arlo has grown into a handsome boy who will be three years old in a few weeks. Although I know that someday we will have to deal with the inevitable and although I like to think that we will be prepared for it, the reality is… we’ll do the best we can when the time comes.  For now, we’ll just enjoy our cuddles. 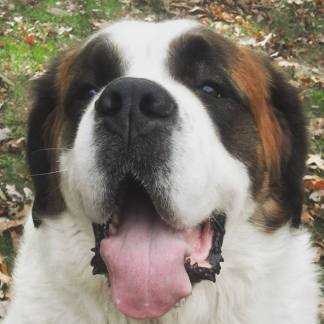 31 thoughts on “Living and Dying with Giant Breed Dogs”